Falcon 4.0 is the culmination of many years of development. This game took so long to produce that many people thought it would never see the light of day. If it did, we were also worried that we'd see another Battlecruiser 3000 debacle. Luckily, the game finally was released and while the initial release was incredibly buggy and problematic, the newly patched 1.08i version really brings the simulation to the forefront where it was meant to be.

Let's begin with the installation. This game can be fully installed onto your hard drive for about 650 MB. The upside of this is that you don't need the CD to play the game and the game also loads much more quickly. Once installed and patched, you're taken to the opening cinematic, which puts you in the mood for the action to follow. A word to the wise: before playing this game, read the manual. It may look daunting at over 600 pages but it's probably one of the best computer game manuals ever written.

Once in the main menu, you have several options available to you for your gaming pleasure. First, there's the requisite instant action mode, which as it says, puts you right in the air with a sparse objective and lots of enemies to kill.

The next mode is the Tactical Engagement (TE) mode. This mode includes both the game's mission/campaign editor and also the game's highly detailed tutorial missions. These missions are explained in detail in the game's gigantic manual and cover everything from taking off and landing to full-scale air and ground combat. It's a great way to get started and the briefings were written by an actual F-16 trainer, Pete Bonani, who also helped on the project itself.

For all you budding campaign makers out there, TE is one of the best modules you could ask for in a flight simulation -- now that it's been patched, of course. TE allows you to do just about everything from placing units and making events to stringing up whole campaigns. This goes a long way to ensuring a long product life, as if the campaign isn't enough... 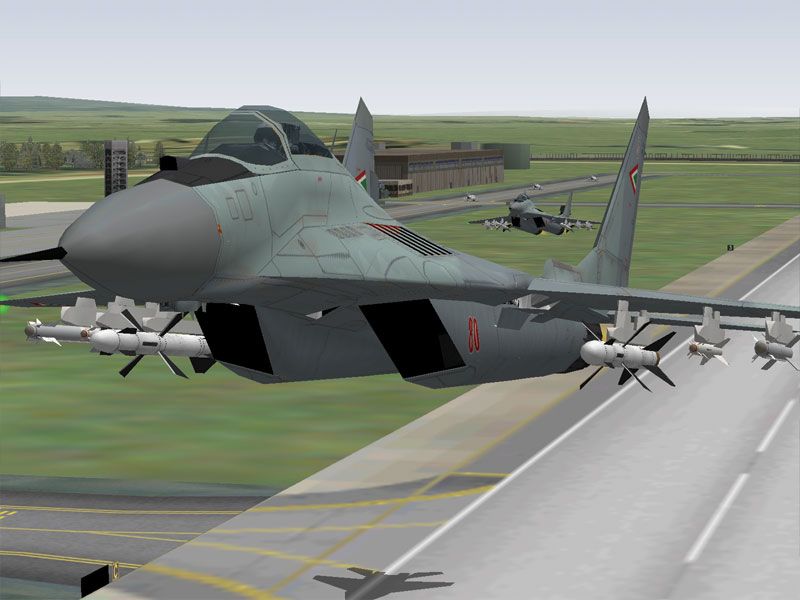 Ah...the campaign...not so beautiful or ambitious an undertaking has yet to be accomplished so well as here in Falcon 4. We have, for our delight, a fully real-time dynamic campaign engine that handles the entire war for us. The campaign scenarios (there are three) all take place in the Korean peninsula and you've got North Korean and Russian forces with which to engage

I've spoken about the types of gameplay available but what about the game itself? Well, if you like your simulations hard core -- you know, where each key on the keyboard has three different functions, then this is the sim for you. The difficulty and flight modeling are all completely scalable, making for either a life-like or arcade experience. If you're like me, you'll put everything to its maximum realism setting.

I've played simulations for years, all at max realism, but nothing prepared me for the sheer workload of the Falcon. This game models just about everything on the real plane itself and almost every button in the cockpit is operational, leading to a myriad of functions and commands. A programmable controller and game commander are almost required to play this game with any sanity.

You're not alone in the skies, however. Due to the dynamic and realistic nature of the game, you're almost always accompanied by at least one wingman. Controlling them or any other type of communication is handled elegantly through a series of menus. These menus can accomplish almost any type of communication you'd want, whether it's with wingmen, the tower or even AWACS.

Once you've gotten good at the campaign missions, which can take a while, you can take to the virtual skies against other humans. Everything in the game, except for instant action mode, can be played in multi-player mode -- including the campaigns. This is the only fixed wing simulation in recent memory (c.1999) other than EF2000 that allowed you to cooperatively fly campaigns and the results are stunning. I was only able to fly with one other pilot due to my lousy 56K modem connection and the flight was a bit choppy. We did, however, have a blast.

The technical aspect of this game is excellent also. Everything is configurable from your graphics and sound drivers to the complexity of the graphics. One major factor that comes into play is the 'Player Bubble.' This adjusts how much activity around you the computer renders. The larger the player bubble, the more objects the computer will have to render, rather than having them abstracted when you're out of view of them. This leads to a large slowdown due to the incredible amount of processing and memory power that the campaign requires.

The graphics and sound themselves look and sound great. The graphics are somewhat a combination of satellite imagery and computer drawn imagery and the results are stunning. The Korean landscape has never looked better and the objects in the game themselves, from tanks to planes, look outstanding and realistic. Sound doesn't fare as well as the graphics, unfortunately. While there's a lot of chatter going on that immerses the player, there's one problem: the engine. The engine, even on afterburner, sounds terrible -- more like a small boat engine rather than the powerful engine of an F-16. This is my only gripe, however.

In conclusion, if you're looking for a great hard-core fixed wing simulation that can keep you occupied for years to come, Falcon 4.0 will be a sure bet. It's got tons of depth and detail. Just make sure you download the latest patch for the game before playing or your results will definitely be less than they could be.

Enjoyment: Very enjoyable if you have the time and patience to learn it.